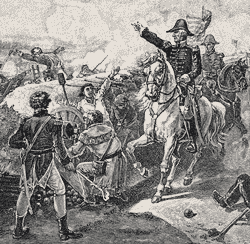 Although a treaty of peace was being arranged with Great Britain, a British army under General Pakenham now set out to seize New Orleans and Louisiana. But when this officer landed near the mouth of the Mississippi, he found General Jackson there ready to meet him. And when a British officer loudly boasted that he would eat his Christmas dinner in New Orleans, Jackson coolly said “Perhaps so; but I shall have the honor of presiding at that dinner.” Thus, you see, Jackson expected to take him prisoner.

The American troops, fewer in numbers than the British army, stood behind a rampart made of cotton bales and mud waiting for the enemy. Shortly before the battle a young officer asked Jackson: “May I go to town to day—” The general quietly answered: “Of course you may go; but ought you to go—” This reminder of duty was enough, and the young man went back to his post to fight. At the first shots, the cotton in the ramparts caught fire, so the Americans had to tumble over their cotton walls, and await their foes behind little heaps of mud four or five feet high.

The British now advanced in admirable order. As they drew near, Jackson rode slowly along his line, encouraging his men and saying: “Stand to your guns. Don’t waste your ammunition. See that every shot tells.” The Americans, therefore, took careful aim, and when Jackson cried, “Give it to them, boys! Let us finish the business today,” their firing proved so deadly that whole rows of dead soldiers lay upon the ground.

Still, the enemy marched steadily on, encouraged by the loud music of a little drummer boy perched up in a tree, but they were driven back again and again. The hot fire of the Americans slew Pakenham and many officers, and killed or wounded about a fifth of the British army, while the American loss was trifling. But had there been an Atlantic cable in those days, this battle of New Orleans (January, 1815) need never have been fought, for peace had been signed in Europe a few days before it took place. Henry Clay expected to go to England as ambassador, and when he heard how bravely our men had fought at New Orleans he joyfully cried: “Now I can go to England without mortification.”

The news of the treaty of Ghent (1814) reached Washington just nine days after the tidings of the victory at New Orleans. Although no mention was made of boarding ships, seizing sailors, or exciting the Indians, the war and treaty put an end to most of those things.

In the War of 1812 the United States won the right to trade as it pleased, and proved to England that its rights had to be respected, and that our men were as brave on land as on sea. But the war cost many lives on both sides, and greatly increased our national debt, which, in 1816, when our Union counted nineteen states, amounted to about one hundred and twenty–seven million dollars.