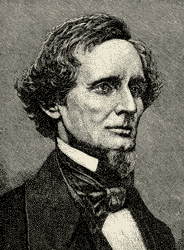 A rumor had arisen that, even if elected, Lincoln should never be inaugurated. This made his friends so anxious for his safety that they persuaded him to travel secretly to Washington. There he was inaugurated, on March 4, 1861. After taking his solemn oath to “preserve, protect, and defend the Constitution of the United States,” Lincoln made a grand speech, saying that, while he must at any cost keep this oath, he had no intention whatever of meddling with slavery in the states where it already existed.

He said that, in his opinion, no state could leave the Union, declared that he would hold the forts still belonging to the Union, and firmly but kindly added: “In your hands, my dissatisfied countrymen, and not in mine, is the momentous issue of civil war. The government will not assail you. You can have no conflict without being yourselves the aggressors.”

For the first month after his inauguration, Lincoln was so bothered by office seekers that he could not attend to much else. But by this time Major Anderson, who was holding Fort Sumter, was so short of food and supplies that Lincoln sent word to South Carolina that he was going to send him help. This message was given to Jefferson Davis, who called a council to decide whether the supply should be allowed to come in or not.

There were two opinions about this, even in the Confederate Cabinet, and after some one had spoken warmly in favor of taking the fort by force, the secretary of state gravely said: “The firing upon that fort will inaugurate a civil war greater than any the world has yet seen. . . . You will wantonly strike a hornet’s nest which extends from mountains to ocean, and legions now quiet will swarm out and sting us to death.”

In spite of this warning, Jefferson Davis finally decided that Sumter must be taken. He bade the Southern general, Beauregard, not to allow any supplies to pass in, and to fire upon the fort if it did not surrender. As Anderson firmly refused to yield to Beauregard’s summons, the bombarding of Fort Sumter began on April 12, 1861.

At the end of about thirty hours the fort was a heap of smoking ruins, and as there was neither food nor ammunition left, Anderson was forced to haul down the Union flag and surrender. But he and his men were allowed to leave with their arms and colors, and the flag they thus saved was, as we shall see, again raised over Fort Sumter four years later.

Although there were none killed on either side in this battle of “seventy men against seven thousand,” the firing on Fort Sumter acted like an electric shock upon the whole nation. Until then there had been two kinds of patriots in the North; but the fact that the flag had been fired upon put an end to all disputes, and the people rose like one man to defend it.

Lincoln, who had made no preparations for war, so as not to make the South angry and force matters, now called for seventy–five thousand men “to maintain the honor, the integrity, and the existence of the Union.” These men were called for three months only, because people then fancied that the war would be over in ninety days at the utmost.

In fact, at this sad time both parties greatly misunderstood each other. Educated people in the North felt sure the South would yield rather than see blood shed. But educated people in the South felt equally certain that for the sake of peace the North would yield, as had so often happened before. Besides, there were ignorant Northerners who fancied that Southern people were “fire eaters,” and could only talk; while the same class in the South loudly boasted that the Yankees “would back up against the north pole rather than fight,” and that “one Confederate could whip five Yankees.”

Lincoln’s call was answered with a promptness which showed how ready Union men were to defend their flag. Before thirty–six hours were over, troops began to gather in Washington, which was considered the most dangerous point, as it was so near the Southern states. These Northern soldiers wore blue uniforms, and as they came to defend the Union and uphold the federal government, they were called Unionists or Federals. As many of them came from the New England states, they were also often called Yankees. Southern troops, who responded to Jefferson Davis’s call just as promptly, wore gray uniforms, and were called Confederates by their own people, and rebels or Johnnies by the Unionists.

In those days there were not nearly so many railroads as there are now. To reach Washington, troops from Pennsylvania and the East had to pass through Baltimore, where the two depots were at opposite ends of the town. Now, Maryland was a slave state, but so many people there were against slavery that it never joined the Confederacy.

While some Union troops were marching through the city on their way to Washington, on the eighty–sixth anniversary of the battle of Lexington, they were first hooted at and then attacked by a mob of slavery men. The soldiers kept their temper and took the insults calmly, but before long several shots were heard. One of the soldiers, mortally wounded, swung around, saluted the flag, crying, “All hail the stars and stripes.” and then fell down dead.

The sight of three lifeless companions proved the “lighted match which set fire to the powder magazine,” and the Union troops shot at the mob. Several persons in the crowd were killed or wounded, and the troops had to fight their way, as it were, out of the town. Because these Northern regiments suffered in passing through Baltimore, the rest were taken by water to Annapolis and thence on to Washington.

The Southern people were very brave, and to show the North that they were not afraid, Jefferson Davis made a proclamation two days after Lincoln called for soldiers. In it he said he would give Confederate vessels leave to take or destroy Union vessels wherever they met them on the seas.

Now, you must know that war consists largely in giving tit for tat. So when Lincoln heard that Southern vessels were making ready to capture Northern vessels, he quickly ordered all the Southern ports closed, and forbade any ships to sail out of the harbors of the states which had seceded. To make sure that these orders would be obeyed, Northern vessels were sent to blockade the Southern ports. But, at that time, there were very few ships in the Union navy, and to keep guard over a coast line more than two thousand miles long a great many were needed.

Almost everything that could float was, therefore, called into service, and Southern vessels passing in and out could do so only by running past the Union blockade. This was dangerous work, for the Union vessels were armed with guns, and did their best to catch or sink the Southern vessels. Still, the blockade runners were very wary, and as their ships and sails were painted gray, they could not easily be seen, and they often managed to slip past. At first the blockade was not strict at all, but every day it became more severe. It had to be close to prevent the South from sending out cotton, sugar, or tobacco, because the money those products brought in served to buy new supplies for the Southern army.

When war broke out, several states were undecided which side to take, but before long they made up their minds, and Arkansas, Tennessee, North Carolina, and part of Virginia joined the Confederacy, which thus embraced eleven out of the thirty–four states. But the western part of Virginia later formed a separate state, called West Virginia, because the people living there wanted to remain in the Union.

Soon after Virginia joined the Confederacy, Richmond became the Confederate capital. The fact that Washington and Richmond lay so close together made the largest forces collect there, and while the cry in Washington was “On to Richmond!” in the Confederate army it was “On to Washington.” As the Confederates held the Shenandoah valley, and had long been preparing for war, it seemed as if they could easily reach the Union capital; and hence it became necessary to have troops enough to defend it.

The Southerners were ready, as we have seen; and while most of the white men fought in the army, their plantations were worked by their slaves, who thus supplied them with the food they needed. Hearing that war had broken out, a few Negroes came into the American lines, asking to be set free. But the Northern people, mindful of the fugitive slave law, would not at first allow them to stay, and sent them back to their masters.

Still, when the Unionists saw that the slaves built most of the fortifications, acted as teamsters, and served the soldiers in many ways, General Benjamin F. Butler said they ought to be seized as well as tools, ammunition, or anything else which helped the enemy. Because such things are called “contraband of war,” slaves were classed as such, also, and before long many of them came into the Union lines, shouting, “I’s contraband, massa, I’s contraband.” knowing this would secure them good treatment.