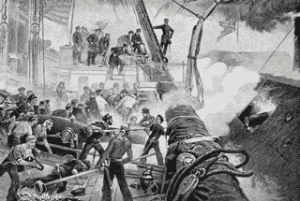 The Southern Confederacy was now in a bad plight; for, while it had won most of the triumphs in the beginning of the war, it had lately lost heavily, and its resources were exhausted.

Besides, its seaports had fallen, one by one, into the hands of the Union, and now it had hardly any left. In 1864, two years after taking New Orleans, Admiral Farragut went to attack Mobile. He wrote home, saying: “I am going into Mobile Bay in the morning, if God is my leader, as I hope he is.” True to his resolve, he ran into the bay, past the great guns of the Confederate forts, and in spite of the rams which tried to stop him.

To direct this battle, Farragut was tied fast to the rigging, and when one of his officers called out that they could not proceed on account of the torpedoes which had been sunk in the channel, he answered that this was not the time to think of torpedoes. Then, taking the lead, he bade his engineer run at full speed, and dashed safely ahead. Here, in Mobile Bay, took place a famous naval battle. The iron ram Tennessee was captured only after a hard struggle, and the port was blocked so securely that not a single vessel could pass in or out. But the city itself was not taken till the next year, at the end of the war, and with the help of Union land forces.

About two months after Farragut steamed into Mobile Bay and captured the iron ram Tennessee, another Confederate ram, called the Albemarle, played havoc among the Union vessels blockading the coast of North Carolina. It had already done a great deal of damage, and was getting ready to do more still, when Lieutenant W. B. Cushing proposed to destroy it while it was lying at anchor at Plymouth.

Stealing into the harbor one dark October night, Gushing and fourteen men drew close to the ram before they were seen. When only twenty yards away they were discovered, and fired upon; but in spite of the bullets splashing into the water all around him, Cushing ran his small boat close up to the Albemarle, released his torpedo, and, bidding his men look out for themselves, set it off.

At that very moment a shot from the Albemarle struck his boat, which was dashed to pieces; but a second later a frightful explosion was heard, and the ram was a wreck. As for Cushing and his men, they were struggling in the water in the darkness, surrounded by floating bits of wreckage. Only two of them managed to escape, and Cushing himself, although slightly wounded, swam bravely ashore and hid in a swamp, where some kind–hearted colored people found him and brought him food.

After hiding there all day, Cushing got into a leaky little boat he found near the shore, and, in spite of weakness and stiff muscles, paddled out to a Union ship, where the sailors were anxiously watching for the return of his launch. They saw him coming, but, failing to recognize him in this sorry plight, sternly hailed him, crying: “Who goes there—” A weak voice answered: “A friend—Cushing; take me up.” The men, hanging almost breathless over the ship railing, then cried: “Cushing! and the Albemarle—” “Will never trouble the Union fleet again,” answered the same weak, hoarse voice. “She rests in her grave on the muddy bottom of the Roanoke.”

You can imagine with what joy this news was received, and how eagerly hands were now stretched out to help Cushing on deck. There, all crowded around him to hear about it, and while the men mourned their lost companions, they heartily cheered Cushing, whose heroic deed will never be forgotten.