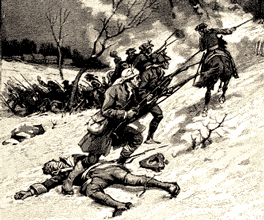 The British, who had left New York two months after the treaty was signed, kept possession of Oswego, Detroit, and Mackinaw in the Northwest until the promises made should be kept. Their presence there made the people restless and unhappy, for they secretly urged the Indians to rise up against the Americans. Besides, there were money troubles everywhere, for the states were so deeply in debt that they were obliged to lay heavy taxes on the people. These taxes were such a burden that in some places the people actually rebelled and made riots.

The most serious of all these outbreaks was in Massachusetts, where Shays, an old Revolutionary soldier, led a force of about two thousand men against Worcester (woos’ter) and Springfield. Although this revolt –known in history as Shays’s Rebellion” was put down in 1787, it helped to show the necessity for better laws. These had to be made soon, if the thirteen states were to remain united, and not form thirteen small republics, which would be sure to quarrel.