Sherman’s March To The Sea 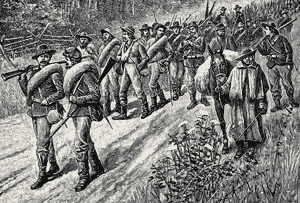 Sherman had gone steadily on, and had burned the rich stores and fine mills and factories of Atlanta. The churches and dwelling houses were not harmed, for Sherman’s object was only to destroy the shops and factories which supplied the Southern army with arms, food, garments, or anything else.

After cutting all the telegraph wires, so no one could send news of his next movement, Sherman suddenly left Atlanta and set out for his famous “march to the sea.” He had long been preparing for this. His plans were all made, and he sent on his sixty thousand men in four great columns. Their orders were to head for Savannah, three hundred miles away, to destroy all the railroads and supplies along a strip sixty miles wide, and to take nothing with them but the food they needed.

While the main army, therefore, marched steadily on, skirmishing parties overran the country, burning or breaking all they did not carry off. Last of all came the men whose duty it was to tear up railroads and burn bridges. They were adepts in this work, and finding that iron rails merely bent could be straightened out and used again, they adopted a new plan of destruction.

First, the railroad ties were torn up, piled together, and set afire. Then the rails were laid over the red–hot coals, so that the middle part of each one was heated red–hot. Two men next grasped a rail at either end, and, running to the nearest tree, twisted it around the trunk, thus making what the soldiers jokingly called “Jeff Davis neckties.”

It was thus that the Union army left nothing but ruin and desolation behind it. This seems very wicked, but it is one way of making war, and Sherman thought it was wiser to stop the Confederates by depriving them of supplies than by killing so many men in pitched battle.

The roads were very bad during this five weeks’ tramp, for the year (1864) was rapidly drawing to its close; but the men went merrily on, cheering their leader whenever he rode past them, and sturdily singing the familiar war songs.

The result of this move was just what Grant and Sherman had expected, and as soon as the army reached Savannah they stormed Fort McAllister and thus forced the city to surrender. As telegraphs and railroads had all been destroyed, no news had been heard of Sherman and his sixty thousand men since they had left Atlanta. So there were many anxious hearts in the North besides the President’s, and as week after week went by the suspense grew awful.

Knowing this, Sherman no sooner reached Savannah than he sent a dispatch by boat to Fortress Monroe, so it could be telegraphed from there to Washington.

Some one standing near him cried that the message would probably reach the President on the 25th of December; so Sherman wrote to Lincoln: “I beg to present you as a Christmas gift the city of Savannah, with one hundred and fifty heavy guns and plenty of ammunition; also about twenty–five thousand bales of cotton.” This message reached Lincoln on December 24, and the news, being flashed over telegraph wires, made many anxious Northern people spend a very thankful Christmas Day.

Sherman had first expected to take his army northward by sea; but after the capture of Savannah it was determined that he should march northward. Although he did not say a word of this plan, his men all suspected it. They were so impatient to go on that during their month’s rest in the city they often called out when he rode past: “Uncle Billy, I guess Grant is waiting for us at Richmond.”

Sherman was almost as impatient as his men; so as soon as he thought they were well rested, he led them up to Columbia, and then advanced, driving his old foe Johnston ahead of him, and beating him at Averysboro and Bentonville (1865). While he was doing this, other Union troops occupied Charleston, which, after a long resistance, had finally surrendered.

Sherman’s aim was to join Grant and help him crush Lee, who was still defending Richmond with the last large Confederate army. The roads were now worse than ever; but all were so eager to finish the war and go home, that the men cheerfully tramped on through mud and rain, waded through streams, and even fought one battle on ground covered with water.

Some of the swamps were so broad and treacherous that Sherman’s army had to build corduroy roads through them. This was hard work, too; but the men all worked bravely, and cut down trees, whose trunks, laid side by side on top of larger timbers, formed a firm but very rough road. At Goldsboro, Sherman’s army was joined by two other bodies of Union troops; and there, while the men were again resting after their hard labors, Sherman hurried off to meet Grant, at City Point, and plan the next moves with him.