Monitor And The Merrimac 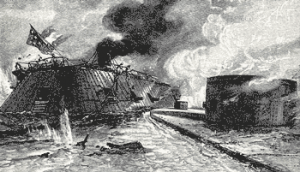 At the very beginning of the war, the Confederates seized the Norfolk navy yard and the big ship Merrimac. For some time past there had been rumors afloat that they were changing this vessel into an ironclad, so strong that no cannon balls could harm it.

This was quite true, and the Confederates relied upon this ship to play havoc with the Union fleet in Hampton Roads, at the mouth of the James River. When quite ready, therefore, the Merrimac steamed out, at noon, on March 8, 1862, while thousands of people stood on the shore, anxiously waiting to see what it would do.

The first vessel it encountered was the Cumberland. This ship defended itself heroically. The guns were fired until it sank, and the water ran into their mouths; but the Union sailors refused to surrender. It is said that when summoned to do so, the Union commander nobly answered: “Never! I’ll sink alongside.”

True to his word, he and his crew gallantly went down with their vessel, the Union flag still floating at the masthead. For months after it continued to wave there, because, the vessel having sunk in only fifty feet of water, the tops of the masts still rose above the waves.

The destruction of the Cumberland was quickly followed by that of the Congress, which ran aground, was set afire by red–hot cannon balls, and was forced to surrender. But when boats came from the Merrimac to take possession of it, the Union troops in a fort near by began to bombard them. The Confederate officers loudly bade them stop, saying the vessel was theirs; but the commander of the fort defiantly answered: “I know the ship has surrendered; but we haven’t;” and he went on firing in spite of all their objections.

Still, the Merrimac (which the Confederates had renamed the Virginia) was quite unharmed by all the shot poured upon her, and had lost only a very few men. She therefore went back to port that evening (March 8, 1862) with the firm intention of coming out again on the morrow, to destroy all the other vessels of the Union navy within reach.

The news of the sinking of the Cumberland and of the burning of the Congress filled Union hearts with dismay, for it now seemed as if nothing could resist the terrible Southern ironclad. But the President and Congress had been preparing for this danger. Several months before, they had given orders to John Ericsson, the inventor of the hot–air engine and of the screw propeller for steamships, to make a ship after a strange model which he had shown them.

The work was carried on in secret, and at the end of one hundred days the Monitor was all ready. When the huge Merrimac steamed out, on the next day, to attack the Union fleet, she met a small and strange–looking craft, which has been described as a “cheese box on a raft.” But the “raft” was of iron, the “cheese box” was a revolving turret with two big guns inside it, and the little Union David, although manned by only a few very brave men, came boldly on to tackle the Confederate Goliath.

When the Merrimac tried to attack one of the Union vessels, the little Monitor got between them, and now began the “most important single event of the war.” The Merrimac vainly poured her fire upon the Monitor. The heaviest cannon balls glanced off when they happened to strike its iron hull, which, being almost level with the water, could not easily be hit. Besides, the Monitor was so small that it circled round and round its huge foe, hurling heavy balls from its two big guns.

Still, after a while, a ball from the Merrimac struck the Monitor’s pilot house and knocked a bit of lime into the principal officer’s eyes. Blinded thereby, he was forced to give up the command; but his companions continued the battle with such spirit that, when evening came, the Merrimac went back to port, and never ventured out again. At the news of this victory the Union people almost went mad with joy.

Thus, although the Monitor did not again take part in any great battle, it saved the Union at a moment of great danger. The inventor Ericsson won much praise for the good work his vessel had done, and since then many vessels have been built for our navy on about the same plan. In honor of the first ship, they are called monitors, too; but each of them also has a special name, like all other vessels in our navy.