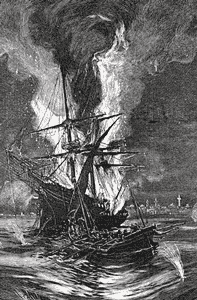 Several other naval battles took place during the War of 1812. One of the most famous of these was a duel between Captain James Lawrence’s ship, the Chesapeake, and the British frigate Shannon. The Chesapeake had just come back from the Cape Verde Islands, and had, lost a mast in a storm. The crew, numbering many foreign sailors, was therefore sure the ship was “unlucky;” but when the British captain sent Lawrence a challenge to come out and fight, he sailed out of Boston harbor without delay.

Lawrence was very brave, and had taken part in many a fight since he had helped Decatur destroy the Philadelphia in the harbor of Tripoli; besides, he had sunk the British vessel, the Peacock, only a short time before. His ship soon met the English frigate, and the battle began shortly before nightfall. Twelve minutes later the Chesapeake was unmanageable, but Lawrence called his men to board the enemy. They did not obey very quickly, and before the order could be repeated, Lawrence was mortally wounded by a musket ball. As his men carried him below, he cried: “Tell the men to fire faster, and not to give up the ship; fight her till she sinks.”

In spite of these brave words, Lawrence’s ship had to surrender, but his heroic cry has never been forgotten; and whenever people seem discouraged or ready to give up trying, we still urge them on by Lawrence’s cry: “Don’t give up the ship.”

The captive Chesapeake was taken to Halifax, where Lawrence and his brave officer Ludlow both breathed their last. But their remains were finally brought to New York, where they rest under the same monument in Trinity churchyard.

Although the British navy was so much larger than ours, it had suffered so much in encounters with our vessels that this first victory caused extravagant joy in England. Captain Broke of the Shannon was loaded with honors, and the people of his native county, Suffolk, gave him a beautiful silver plate, in the center of which the two vessels are shown.