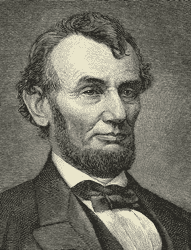 Lincoln never pretended to be either wise or clever, but his life motto was “to do his level best,” and he manfully put it into practice. He did not like to hear all the quarreling that was going on, and always did all he could to stop it. But when he thought a thing right, he could be very firm; and once, after some ministers tried to convince him, by quoting Bible texts, that slavery was not wrong, he cried:

“I know there is a God, and that He hates injustice and slavery. I see the storm coming, and I know His hand is in it. If He has a place and work for me,—and I think He has,—I believe I am ready. I am nothing, but truth is everything. . . . Douglas don’t care whether slavery is voted up or down; but God cares, and humanity cares, and I care, and with God’s help I shall not fail. I may not see the end, but it will come, and I shall be vindicated [proved right], and these men will find that they have not read their Bibles aright.”

When called upon to make his first speech as senatorial candidate, Lincoln said: “—A house divided against itself cannot stand.” I believe this government cannot endure permanently half slave and half free. I do not expect the house to fall, but I expect it will cease to be divided. It will become all one thing or all the other.” This speech is so plain, yet so clever, that it has always been greatly admired. As we have seen, Lincoln had won many friends, so when the time came to elect a new President he was one of the candidates proposed.

During this campaign some of the opposite party tried to spoil Lincoln’s chances by calling him a “rail splitter.” But his friends promptly said that was nothing to be ashamed of, and even carried rails in their processions. When asked whether he had really split the rails they thus paraded, Lincoln once smilingly said that he could not swear to the rails, although he had certainly split a great many just like them. A few gentlemen from the East, seeing Lincoln’s awkward figure, felt sure he would never do for President, but they changed their minds after hearing a speech he made in New York. All listened to it spellbound until he closed it with the noble words: “Let us have faith that right makes might, and in that faith let us to the end dare to do our duty as we understand it.—.

The campaign was an unusually exciting one, for the Southern states had vowed that if Lincoln was elected they would leave the Union. Every one, therefore, anxiously awaited the result of the election; and when it finally became known that Lincoln was chosen, the long–gathering storm burst. The time was now rapidly drawing near when our country was to be a prey to the saddest and bloodiest conflict in our history. War is a very sad thing, even when it has to be waged on outsiders; but a civil war, where friends, fellow–citizens, and even families are often divided, is the saddest thing in the world.

Without even waiting to see what Lincoln would do, the senators from South Carolina left their seats in Congress and went home. Next, a meeting was called in Secession Hall, in Charleston, South Carolina, where it was decided that South Carolina, the “Palmetto State,” should separate, or secede, from the Union (December 20, 1860). The Southern people, you know, firmly believed that they had a perfect right to leave the Union whenever laws were made which they thought unfair.

They were so sure they were doing right that in less than two months six other states joined South Carolina in seceding from the Union. Then the seven states, South Carolina, Georgia, Alabama, Florida, Mississippi, Louisiana, and Texas, united to form a new republic, which was called the “Confederate States of America.” Southerners said that this new republic was to have “slavery for its corner stone,” and chose a well–known man, Jefferson Davis, for its President. At first Montgomery was the capital of the Confederacy, which adopted a flag with three bars and seven stars instead of the stars and stripes. When this became known in the North, and the people there realized that the new banner would be raised instead of the stars and stripes, they became so excited that Secretary Dix telegraphed to New Orleans: “If any person attempts to haul down the American flag, shoot him on the spot!”

The Confederates, or secessionists, next seized most of the Southern forts belonging to the United States, except Forts Pickens and Sumter, which the officers refused to surrender. They also fired upon a ship called the Star of the West, when it came into the Charleston harbor to bring supplies to the government troops at Fort Sumter. In fact, the Confederates showed themselves so determined not to let it come in that it had to turn around and go back.

The Southerners believed so thoroughly in state rights that, although many of them did not wish to secede, they felt it their duty to do so. Thus more than two hundred officers who had been in the United States service, and had won laurels in the Mexican War, now gave up their positions in the army and navy and returned home.

The talk of secession by the Southern states, during Lincoln’s campaign, had greatly bewildered President Buchanan, who looked on helplessly, and did nothing. He said that the Southern states had no right to secede, but added that he had no right to force them to stay in the Union. Everything was therefore left for Lincoln to settle, and people anxiously wondered what he would do.

A rumor had arisen that, even if elected, Lincoln should never be inaugurated. This made his friends so anxious for his safety that they persuaded him to travel secretly to Washington. There he was inaugurated, on March 4, 1861. After taking his solemn oath to “preserve, protect, and defend the Constitution of the United States,” Lincoln made a grand speech, saying that, while he must at any cost keep this oath, he had no intention whatever of meddling with slavery in the states where it already existed.

He said that, in his opinion, no state could leave the Union, declared that he would hold the forts still belonging to the Union, and firmly but kindly added: “In your hands, my dissatisfied countrymen, and not in mine, is the momentous issue of civil war. The government will not assail you. You can have no conflict without being yourselves the aggressors.”

For the first month after his inauguration, Lincoln was so bothered by office seekers that he could not attend to much else. But by this time Major Anderson, who was holding Fort Sumter, was so short of food and supplies that Lincoln sent word to South Carolina that he was going to send him help. This message was given to Jefferson Davis, who called a council to decide whether the supply should be allowed to come in or not.

There were two opinions about this, even in the Confederate Cabinet, and after some one had spoken warmly in favor of taking the fort by force, the secretary of state gravely said: “The firing upon that fort will inaugurate a civil war greater than any the world has yet seen. . . . You will wantonly strike a hornet’s nest which extends from mountains to ocean, and legions now quiet will swarm out and sting us to death.”

In spite of this warning, Jefferson Davis finally decided that Sumter must be taken. He bade the Southern general, Beauregard, not to allow any supplies to pass in, and to fire upon the fort if it did not surrender. As Anderson firmly refused to yield to Beauregard’s summons, the bombarding of Fort Sumter began on April 12, 1861.

At the end of about thirty hours the fort was a heap of smoking ruins, and as there was neither food nor ammunition left, Anderson was forced to haul down the Union flag and surrender. But he and his men were allowed to leave with their arms and colors, and the flag they thus saved was, as we shall see, again raised over Fort Sumter four years later.

Although there were none killed on either side in this battle of “seventy men against seven thousand,” the firing on Fort Sumter acted like an electric shock upon the whole nation. Until then there had been two kinds of patriots in the North; but the fact that the flag had been fired upon put an end to all disputes, and the people rose like one man to defend it.

Lincoln, who had made no preparations for war, so as not to make the South angry and force matters, now called for seventy–five thousand men “to maintain the honor, the integrity, and the existence of the Union.” These men were called for three months only, because people then fancied that the war would be over in ninety days at the utmost.

In fact, at this sad time both parties greatly misunderstood each other. Educated people in the North felt sure the South would yield rather than see blood shed. But educated people in the South felt equally certain that for the sake of peace the North would yield, as had so often happened before. Besides, there were ignorant Northerners who fancied that Southern people were “fire eaters,” and could only talk; while the same class in the South loudly boasted that the Yankees “would back up against the north pole rather than fight,” and that “one Confederate could whip five Yankees.”