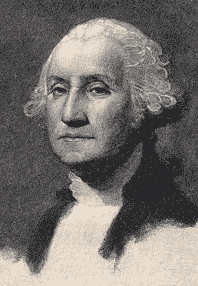 As soon as the election was over, the news was carried by a horseman to Mount Vernon, where Washington was busy farming. Although several attempts had been made to reward him for his services, he had steadily refused all pay. When the state of Virginia wished to honor its greatest citizen, it made him a present of some bonds. But, true to his principles, Washington would not accept any reward. Still, finding it would hurt the Virginians’ feelings if he entirely refused their gift, he suggested that the money be used to found the university which now bears his name and that of Robert E. Lee, the great Southern general.

Washington had hoped he would never have to leave his beautiful home again, but when he heard that he was elected President, he quickly and unselfishly prepared to go and serve his country in a new way.

All along the road to New York he was welcomed by bell-ringing, speeches, receptions, etc., the people all trying to show their love and respect for the man who had brought them safely through the Revolutionary War. When he came to Trenton Bridge, where he had once won a great victory thirteen young girls, all dressed in white, strewed flowers under his horse’s feet. Over his head were green arches bearing mottoes, one of which said that Washington had watched over the mothers, and would therefore take good care of the daughters. Here, too, a band played music written in Washington’s honor, and called the “President’s March.”

As there were no ferries in those days such as we have now, Washington was rowed across to New York in a barge, which was manned by thirteen sailors in fine new red, white, and blue uniforms.

Owing to the slow means of travel, Congress had assembled on the 6th of April, instead of on the 4th of March, as had first been planned; and Washington’s inauguration did not take place till the 30th of April. For this solemn ceremony, Washington was clad in garments every thread of which had been grown and made in America. To give all the people a chance to see him, Washington stood on the balcony of Federal Hall, New York, on the very spot where his statue now stands, on Wall Street.

Laying his hand upon a Bible, which has been carefully preserved, he then publicly took this oath: “I do solemnly swear that I will faithfully execute the office of President of the United States, and will to the best of my ability preserve, protect, and defend the Constitution of the United States.”

As you see, this is a very solemn promise, and it was no easy task that Washington had thus undertaken. The Congress was all new, President and Vice President were new, and there was no one there to tell them what they were to do. The United States was then, it is true, only a third-rate country (of no more importance than Belgium or Denmark is now), but the men at the head of the government had to behave in such a way that every one would learn to respect it. Besides, as there were then no other republics in the world which could serve as models, except Switzerland, it was hard for them to know just how a republic should act.

Nevertheless, Washington proved calm, firm, and just, as ever, and order was soon brought out of chaos. Washington, who was addressed as “Mr. President,” chose Jefferson, Hamilton, Knox, and Randolph to help him govern, and they formed what is now called the Cabinet. He also selected judges, making John Jay the first Chief justice of the Supreme Court, and sent ministers to the principal countries in Europe.

To make sure that the people, who had been accustomed to the pomp of royal governors, should not fail in respect for their new government, Washington, who was always very dignified, generally rode out in a carriage drawn by six horses, and escorted by powdered and liveried servants. He also gave ball stately dinner parties and balls, which latter he generally opened himself by dancing a minuet. Besides that, he held receptions, to which every one could come. He did this because all men have equal rights in a republic, and, being the representative of the poor as well as of the rich, he said both had the same right to visit him.

Congress was very busy for several years, for the money affairs of the United States were in a bad condition. Some of the members said that our country would never be able to pay all the money it owed. But it was finally decided that not only the debts of the Continental Congress should be paid, but also the state war debts. This was a large sum, amounting to about seventy-five million dollars; but Congress promised to pay it, saying it would be as dishonest for a country to refuse to pay every penny owed, as for a private person to do so. Congress also put a tariff upon goods brought from abroad; arranged, in obedience to the Constitution, that a census should be taken every ten years; and decided that the United States should have a national bank, and a mint to coin the money used in the country.