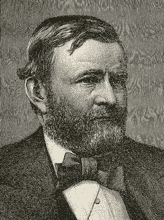 Two questions arose with Great Britain while Grant was President, which might have made trouble. But, instead of fighting, some of the best statesmen of both countries made a treaty at Washington (1871), saying that the difficulties should be decided by arbitration.

A board of distinguished men, therefore, met at Geneva, in Switzerland, to settle what are known as the “Alabama claims.” You remember that during the Civil War a vessel of that name and other ships were built in England,—a neutral country,—and handed over to the Confederates, who used them to destroy many Union vessels.

After weighing both sides, of the question, this board decided that a neutral country should not furnish vessels and arms to nations at war. As Great Britain had clearly been in the wrong in this case, she was condemned to pay the United States fifteen and a half million dollars as damages for property destroyed.

The second question—the water boundary between the United States and British Columbia in Puget Sound—was left entirely to the Emperor of Germany, who drew the line on the map where it now stands.

While Grant was President there was much talk about the Indians. The greater part of them had, little by little, been removed to the Indian Territory, where the Choctaws, Creeks, Cherokees, and Seminoles had houses and schools, and were fast learning to be very good farmers.

But, besides the orderly and industrious Indians, there were others who were as wild as their ancestors. The food furnished to these tribes by the government agents was not fit to eat, for most of the money devoted to this purpose was stolen by dishonest men. But the President had no idea of this until a Yale professor went to a Sioux Reservation to get specimens for the college museum. The Indians there called him “The–Man–who–came–to–pick–up–Bones,” and their chief, Red Cloud, gave him samples of the food dealt out to the savages, making him promise to show them to the “Great Father” (the President).

The professor kept that promise; and when Grant saw the samples, and heard from some of the officers that the Indians had a right to complain in many cases, he decided that a change must be made.

Since then matters have gone on a little better. Various improvements have been made, and in the government schools you can now see many Indian boys and girls learning to be teachers, so they can help their people to become good American citizens.

Among the worst of the savage Indians, there were the wild Apaches in Arizona, and the Modocs in Oregon, who, unable to agree with the settlers, and refusing to stay in their reservations, were finally forced to obey by the United States troops. This, however, was not accomplished until many Indians and a number of white men had been slain.

The worst Indian war at this time was with the Sioux in the Black Hills in Dakota. Gold having been found there, miners invaded the Indians’ reservation. As the miners and Indians both drank, quarrels and fights soon arose, and, hoping to save bloodshed, the government tried to make a treaty with the Sioux to sell their land and go elsewhere.

The principal chiefs were Sitting Bull and Rain–in–the–Face, who refused to stir. They were then told that they must obey or the troops would force them to do so. But the Indians retreated into the Big Horn valley, where they got ready to fight.

General George A. Custer, who had fought bravely all through the Civil War, set out in June, 1876, to attack them. But he divided his force, so as to strike them from two sides at once, and when he and his two hundred and sixty–two men came suddenly upon the Indians’ camp he found that the Sioux had been joined by many others of their tribe, and now, instead of a few hundred, were five thousand strong!