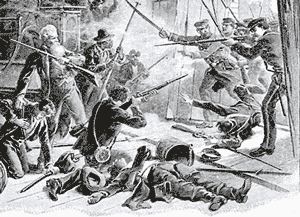 One man who was against slavery was named John Brown. He was a religious man, but not very wise. He went to settle in Kansas, where he spoke his mind so freely that the slavery people there soon learned to hate him. In a fight at Osawatomie, John Brown was victorious, but lost one of his relatives. This loss almost crazed him, and made him all the more anxious to put an end to slavery. Indeed, he finally imagined that the Lord had specially chosen him to do this work.

As he could not stay in Kansas, where a price had been set upon his head, John Brown of Osawatomie went to Harpers Ferry, in Virginia, in 1859. There, with the help of a few well–meaning but very unwise persons in the North who supplied him with money, John Brown made a plan to free the slaves. As he knew they would need arms to resist capture, he and twenty followers seized the United States armory at Harpers Ferry. Then they seized and imprisoned a few slaveholders.

This was against the laws of both state and country. Before John Brown could escape, he was caught by our troops, tried for treason and murder, and hanged. “John Brown’s Raid,” as his expedition in Virginia is generally called, created a great excitement, for the Southern people did not realize at that time that it was merely the plan of a man half–crazed by suffering. Some Southerners fancied that all the abolitionists in the North were in league with John Brown, and as they had lived through the horrors of small Negro revolts, they were naturally indignant.

In fact, most people in the North thought it very wrong of John Brown to take the law into his own hands or to try to free slaves by violence. They did long to see slavery ended, but they wanted it to be done by vote, and not by force. Besides, they knew, as well as the Southerners, that an uprising of the Negroes was greatly to be dreaded, for the latter were so ignorant at that time, and so easily led, that they might have been urged on to commit the most horrible crimes.

John Brown’s attempt only made slavery quarrels worse, and when the time came for a new election, four candidates were proposed. One of these men, Breckinridge, was in favor of allowing slaves to be carried into all the territories, but another, Stephen A. Douglas, said that the new territories ought to be opened to slaveholders and free men, the settlers themselves deciding for or against slavery. The third man declared merely in favor of union and peace. The fourth, Abraham Lincoln, claimed that, while the laws of states should be respected, slavery ought not to spread any farther, because it was morally wrong.

Now, by the last census made, there were thirty–one million inhabitants in our country, only twelve million of which lived in slave states. You will therefore not be surprised to learn that Abraham Lincoln, the Republican candidate, was elected sixteenth President of the United States (1860).