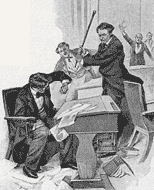 All through Pierce’s term of office, the quarrels between the slavery and antislavery parties continued. Charles Sumner, a senator from Massachusetts, once spoke so strongly against slavery that Preston Brooks, saying that he was insulting all Southerners, attacked him in the Senate chamber, and hit him such a cruel blow on the head that Sumner was ill for more than two years. But, although a few slavery men approved of what Brooks had done, and made him a present of a fine cane as a reward, most people believed that he had done wrong. It was not in Pierce’s power, however, to put an end to the quarrel of those who were for or against slavery, although he made a good President.