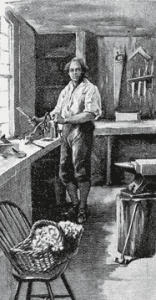 Eli Whitney had always been eager to learn all about machinery. Even when a mere child, he carefully took his father’s watch apart, and put it together again, while the rest of the family were at church. This was done so cleverly that the watch went on running as well as before, and no one would have known it had been taken to pieces, had not the lad confessed it.

When he grew older, Whitney made many useful inventions, and, as his father could not afford to send him to college, he began making nails, and thus earned enough money to study at Yale. Once, while there, he borrowed a carpenter’s tools to make some handy contrivance. The man, watching his deft fingers, cried: “There was one good mechanic spoiled when you came to college!”

On landing in Savannah, Whitney was greatly disappointed to find his place filled by another man. But Mrs. Greene kindly invited the homeless traveler to her plantation. While there, Whitney heard her complain of her embroidery frame, and made her such a good one that she was greatly delighted with it.

One day, in 1793, some planters remarked in Mrs. Greene’s presence that if a machine could only be invented which would separate cotton from its seeds, the Georgians would soon be rich. The lady promptly answered that if the machine could be made, she was sure Mr. Whitney was the man to do it, for he was very clever. Encouraged by her praise, Whitney now sent for cotton in bolls, and, locking himself up in an old outhouse, worked patiently until he made the first “cotton gin” or “cotton engine.”

Although he had to draw all his own wire and make his own tools, Whitney nevertheless patiently overcame every difficulty. The new machine, when tested, was found so useful that with it a slave could do about three hundred times as much work in the same space of time as before. The news of this wonderful invention spread abroad, and created such a sensation that people actually broke into the shed where the cotton gin was kept. They stole it, copied it, and before long began manufacturing other, machines nearly like it.

Whitney tried to stop them by taking a patent, but all in vain. The machine was too useful, and although he objected, the Southerners went on making cotton gins. When Whitney finally appeared in court to ask for help, he was insulted and sent away, and never got any real satisfaction, although it was often promised him.

Thus the man who made the Southern planters rich reaped no money reward from the invention which was to give work to millions of hands. He was, however, more fortunate in his next venture, a cheap way of making gun stocks, for the government gave him a large contract for firearms; he was well paid for this work, and made a fortune. And although his grandest invention, the cotton gin, brought him no money, it won for him great glory, and, what is by far the best of all rewards, the feeling that he had helped his fellow–creatures, and made their work easier.

Still, Whitney’s invention did some harm for a while. The planters, seeing they could now make much money by growing cotton, bought more and more slaves. Many Negroes were obtained in Africa from cruel slave traders, who brought them down to the coast in droves. They were then taken aboard vessels, where they were sometimes crowded so closely, and had so little air, that many of them died and were buried at sea.

The rest, after great suffering, landed at some Southern port, and were taken to a slave market, where they were sold at auction just as if they had been sheep, or articles of furniture. Both men and women were forced to work in the cotton fields, and if they did not do as much work as their master or his overseer expected, they were sometimes whipped.