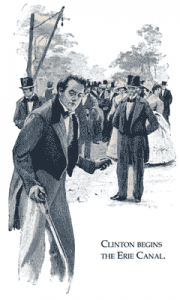 New roads were made in many directions, bridges were built over rivers and brooks, and the National Pike or Cumberland Road made traveling easy between the Potomac and Ohio rivers. Stagecoaches now ran regularly between the principal cities, and steamboats began to appear on all the large lakes and rivers.

Along the roads and down the rivers an endless stream of boats and wagons was going westward, where land could be bought so cheap that many emigrants hastened thither to secure farms. People declared that water ways binding together lakes and rivers would be a great improvement, so Governor Clinton of New York (1817) dug the first shovelful of dirt for a canal which was to connect Lake Erie and the Hudson.

As the work had all to be done by hand, people made great fun of Clinton’s “big ditch,” declaring it would never be finished. But Clinton’s men went calmly on, and after eight years of patient toil his canal was ready. Starting from Buffalo with a party of friends, Clinton sailed all along the new canal to Albany, and thence to New York by the Hudson. When he left Buffalo, a salute was fired, and cannons, stationed all along the road every few miles, boomed forth the great piece of news one after another, thus telegraphing it to New York in about eighty minutes.

It took Clinton much longer than that, however, to reach the ocean, for canal travel is very slow. Besides, he had to stop and listen to many speeches on his way. When he finally reached New York Bay, he solemnly poured a keg of Lake Erie water into the Atlantic, to celebrate “the marriage of Lake Erie and the ocean,” which were now connected by an unbroken water way. This was a grand day for New York city, and the people cheered until they were hoarse, for they could now send merchandise to the Western farmers, and receive their produce in exchange, for about one tenth of the sum it had cost before.