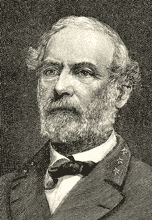 While the War of the Secession was raging on in the southern part of the country, the Sioux Indians in the West, who had always been troublesome, suddenly dug up the war hatchet, and invaded Minnesota and Iowa. Here they attacked lonely farmhouses and small villages, killing and scalping nearly a thousand men, women, and children.

But the Indian revolt was soon ended by the arrival of Federal troops, and public attention was again all turned to the war in the South. Here, early in the spring of 1862, had begun the Peninsular Campaign. It is called so because both armies were on the peninsula between the James and York rivers; and while one was defending, the other was trying to seize the Confederate capital, Richmond.

The Union plan was that McClellan’s army should march up from Yorktown, and McDowell’s come down from Washington, while a small force guarded the Shenandoah valley to prevent the Confederates from attacking Washington. The Confederates, fearing for Richmond, gave up Norfolk to defend their capital. Besides, they burned all their naval stores, and even blew up the Merrimac, so it should never serve the Union again.

But, although clever, the Union plan was hard to carry out. McClellan had to take both Yorktown and Williamsburg before he could proceed to the Chickahominy, where he expected McDowell to meet him. This, however, General McDowell could not do, as he had to stay in the neighborhood of Washington to defend that city against other Confederate forces.

These Confederate forces were under Stonewall Jackson, who, having heard that there was only a small force in the Shenandoah valley, marched up and down it, fought three battles there, and cleverly retreated after burning many bridges.

We are told that once, during this campaign, General Jackson and his staff accidentally found themselves on the opposite side of the river from their troops. A few Union soldiers had already taken possession of the bridge between them, but Jackson rode boldly forward, and called out to the officer standing there: “Who ordered you to post that gun there, sir” Bring it over here.” The officer, at this tone of command, prepared to obey; and it was only when Jackson and his staff dashed safely past him to rejoin the Southern forces, that he saw he had made a mistake, and had obeyed the orders of the enemy.

Jackson’s bold raid in the Shenandoah made the President fear for the safety of Washington; so instead of allowing McDowell to go on and join McClellan, as had been arranged, he bade him come back to defend the capital. Thus, you see, almost at the same moment both capitals were equally panic–stricken. In fact, when people at Richmond heard that McClellan was coming, they were so frightened that the Confederate Congress left the city, and Jefferson Davis’s niece wrote to a friend: “Uncle Jeff thinks we had better go to a safer place than Richmond.”

Heavy rains had made the roads rivers of mud, and McClellan, who had crossed the Chickahominy when it was only a small stream, now had a raging torrent behind him. The Confederates, seeing this, promptly attacked him at Fair Oaks or Seven Pines. Although their General Joseph E. Johnston was sorely wounded, and failed to win a signal victory, the Confederates killed so many Union men that they crippled McClellan’s force.

Johnston being disabled, Robert E. Lee, son of “LightHorse Harry” Lee of the Revolutionary War, now became the head of the Confederate army. General Lee had been trained at West Point, had taken part in the Mexican War, and was a most able general. At the time of the secession he held a high command in the Union army, but he gave it up, thinking it his duty to serve his native state, Virginia.

Lee, whom the Southern soldiers affectionately called “Uncle Robert,” now tried to check McClellan, and for seven days the two armies fought. They had encounters at Mechanicsville, Gaines Mill, Savage’s Station, Frayser’s Farm, Malvern Hill, and Harrison’s Landing. Although the Union troops were never positively defeated in these battles, the Confederates generally had the best of it. Besides, they entirely prevented the proposed siege of Richmond, the object of the whole campaign.