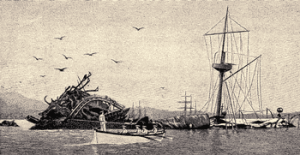 It seems as if there must always be war somewhere. While all was going on smoothly with us, the newspapers told harrowing tales of the suffering in Cuba, where the people were fighting to win their independence from Spain.

Ever since the Spaniards set foot in the Antilles, or West Indies, in the days of Columbus, they had tried to get all they could out of these islands, caring very little for the welfare of the people. Indeed, the natives were soon reduced to slavery; and when most of them had died under harsh treatment, Negroes were brought to replace them.

Even the Spaniards born in those islands were forced to pay heavy taxes and to submit to the hard rule of Spanish governors, who would not listen to their complaints or let them have a just share in the government.

For four hundred years this state of affairs went on in Cuba, the largest island in the West Indies, because although the people there often rebelled, they were not strong enough to drive the Spaniards out of their country.

Still, in spite of cruelty, oppression, and many raids from pirates, Cuba, the “Pearl of the Antilles,” proved so fertile that many of its inhabitants grew very rich. Before the end of the eighteenth century, Havana, its capital, was the largest and gayest city in the New World. It was so important that when English and American troops seized it during the last French and Indian war, the Spaniards gladly gave in exchange for it all the territory then called Florida (1763).

The fact that Cuba is not one hundred miles away from us, and that many Americans own large estates there, has made us take a great interest in this island. Seeing that the Cubans would never be happy under Spanish rule, people from our country broke our laws to help them in their rebellions, and in 1848 President Polk offered to buy the island from Spain for one hundred million dollars.

Spain not only refused to part with this choice possession, but went on treating the Cubans so unjustly that in 1868 they again rebelled, and began a ten years’ war. During this long struggle the Cubans did wonders; but they were so few, compared to the Spanish forces, that they could not win their freedom. In their despair they called upon the United States for aid, but Congress refused it.

Forced to lay down their arms once more, the Cubans now hoped Spain would prove less exacting. Still, cruel treatment drove many away, and more than forty thousand exiles sought refuge in the United States. Here Cuban refugees, merchants whose business suffered whenever there was war on the island, and a few humane Americans whose hearts were touched by the sufferings of the oppressed, kept planning how they could end Spain’s rule.

When a new rebellion broke out in 1895, these people promptly sent help to their friends, hoping they would at last secure their independence. But although our government was again asked to help the Cubans, it declined to do so.

Still, when Spain heard that armed parties were carrying weapons and ammunition from our country to Cuba, she declared it was unfair, and threatened to make us pay damages. Spain was right: a country cannot allow its citizens to help wage war against a nation with which it is at peace. Our government therefore hired detectives, and kept revenue cutters sailing up and down our coast, to prevent the departure of any ships with war supplies for Cuba.

If you look at a map of the United States, you will see what a very long stretch of coast we have from Maine to Texas. It cost us much money to watch it, and as, in spite of all our care, the Cubans in our country managed to send out several secret, or filibustering expeditions, we soon saw we would not only have to pay the bill for guarding our coast, but would be asked to pay damages as well.

Besides, the fact that the Cubans received help from the United States made the Spanish feel very bitter toward us, and they would not believe we were trying to be fair. While they could not keep close enough watch over seven thousand miles of Cuban coast to prevent the landing of filibusters’ cargoes, they nevertheless expected us to patrol our twenty–nine thousand miles of water front so carefully that no expedition could leave our country. In their anger, Spanish officials ill treated Americans in Cuba. Some were unjustly imprisoned, and others deprived of their property, and our consuls’ complaints were unheeded.

Every country is bound to protect its citizens, wherever they may be. The United States, fearing the Americans in Cuba might be attacked in a sudden outburst of fury, now proposed to send a war ship to Havana, to protect our countrymen in case of need. Spain approved of this plan, promising that one of her war ships should visit New York, to show the people that the two nations were still on friendly terms.

The Maine, one of our finest cruisers, was therefore ordered to Havana, where it anchored over a spot pointed out by the Spanish authorities. It had been there only a very short time when a Cuban agent stole a private letter, written by the Spanish minister at Washington, and published it in all our newspapers. Of course this letter was never intended for the public, but when the insulting terms applied in it to our President became known, the minister resigned and left our country.

The night before he sailed, the Maine , while quietly anchored in Havana harbor, was suddenly blown up, and two hundred and sixty brave sailors lost their lives without a moment’s warning. After two explosions close together, the ship sank, while boats pushed out hastily from shore, and from other vessels in the harbor, to rescue the survivors of this awful disaster.

Captain Sigsbee, commander of the Maine, telegraphed the news to Washington. He did not say anything about the cause of the explosion, but he begged the American people to suspend judgment until a further report should be made.

A few days later, several well–known Americans, accompanied by divers, were sent to Havana to examine the wreck. After six weeks’ careful study, these men reported that the Maine had been destroyed by the explosion of a mine placed under it. They could not tell who did it, nor why it had been done; but as such mines are always in charge of trustworthy officers, many people thought that the accident was due either to criminal carelessness or to treachery on the part of the Spaniards.

In the meantime, the Spanish war ship Viucaya had come into New York harbor for its promised friendly visit. On its arrival, the Spaniards heard with dismay of the stolen letter and the explosion of the Maine. Some of our newspapers were so bitter against the Spaniards, that our government, fearing lest friends of the dead sailors might try to injure the Spanish cruiser, had police boats watch it night and day; and most people breathed a sigh of relief when it sailed safely out of our port.