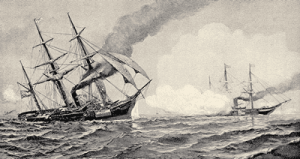 Although quite unprepared for war, the North was in many respects better off than the South. Not only did it have many more inhabitants, but it owned shipyards, machine shops, and manufactories of all kinds, and could thus supply all its army’s needs. This was not the case in the South, where, until then, the main occupation of the people had been agriculture.

By the time summer came on, General George B. McClellan was at the head of a large force in control of West Virginia. Missouri, in the meantime, was almost all in the hands of Union forces, in spite of a Confederate victory won at Wilsons Creek, where the Federal General Lyon was killed. But, although the Confederates failed to secure Missouri and West Virginia, they had built forts so as to control the Mississippi, and still hoped to get Kentucky.

As Kentucky had not seceded from the Union, General Ulysses S. Grant was sent down there to defend it. Before long he managed to take Paducah, which was in the power of the Confederates. He seized it, although the Union troops at this time were not yet used to warfare. Indeed, they knew so little about discipline that when marching along they often broke ranks to pick blackberries.

After several small victories in West Virginia, a Union army under General McDowell marched southward to meet Beauregard at Manassas, or Bull Run. Here the Confederates were first driven back; but they bravely rallied when one of their officers cried, pointing to another: “See, there’s Jackson standing like a stone wall.” This remark was so true that ever after this Southern general was known as “Stonewall Jackson.”

The battle of Bull Run, where two untried armies found themselves face to face on a hot July day, resulted in complete victory for the Confederates, and in an awful defeat for the Federals. To its great surprise and dismay, the Union army was completely routed; but both sides learned a great deal by this fight. The Southerners were no longer quite so sure that one Confederate could whip five Yankees, and the Northern men had found that if they meant to save the Union they would have to work very hard.

General McClellan—the “Soldiers’ Pride,” or “Little Mac,” as his men affectionately called him—now entirely replaced General Scott, who was too old to continue as general in chief. He began to drill the troops vigorously; but there was very little fighting at first, and for a time “all was quiet along the Potomac.” The only engagement of any importance took place at Balls Bluff. Here some Union troops barely escaped, by sliding down a slippery bank more than one hundred feet high. Although their boats were waiting for them in the river beneath, many sank, and the battle of Balls Bluff, like Bull Run, proved a Confederate victory.

Still, the North was not idle, but was making a plan of war. Besides keeping up a strict blockade, the Union government wanted to take Richmond, to drive the Confederates out of Kentucky and Tennessee, and to become master of the Mississippi River, thus cutting the Confederacy in two.

In war time it is very easy to make plans, but it is not nearly so easy to carry them out, as you will see. In spite of the blockade, two Southern men, Mason and Slidell, went to Havana. Here they embarked upon the British vessel Trent, to go to England and ask help for the Confederate States. They had been sent on this mission by the Southerners, who thought that the English would side with them because so many factories in that country depended upon the Southern states for all their cotton.

Captain Wilkes, a Union captain, hearing of this, promptly boarded the British ship Trent, a thing he had no right to do, as we were not at war with Great Britain. He seized Mason and Slidell, and carried them off to a Union fort, where they were kept prisoners: When the “Trent affair” became known, both the Confederates and the British were justly angry, and the latter sent a firm letter demanding that the two captives be set free without delay.

Many people in the North had not stopped until then to think whether it was fair to seize these men or not, and when the letter came they wanted to refuse to give them up. But Lincoln was very cool, and quietly and sensibly said: “We fought Great Britain in 1812 for doing just what Captain Wilkes has done. We must give up the prisoners to England.”

Then, in spite of the outcry raised by some Americans, he calmly went on to do what he considered right. Not only were the two men allowed to go to England, but an apology was sent by Lincoln to Queen Victoria. Still, this capture, and the fact that the Confederates bought and armed vessels in England, caused a great deal of bitter feeling between the two nations, and for a time it really seemed as if the United States would have war with Great Britain too.

A country claiming to be neutral has no right to sell ships or arms to nations at war. Unionists were justly indignant, therefore, when they heard that a fine vessel called the Alabama had been sent out of British waters and handed over to the Confederate navy. After getting it all ready to fight, Captain Semmes began to scour the seas in search of Northern vessels. He pursued and sank, captured, or burned many Northern ships, and it was not till 1864, after a hard fight, that the Kearsarge, a Union frigate, finally succeeded in sinking this terrible foe, off the coast of France.